Canadian Historial Review: A History of Oil Spills on Long-Distance Pipelines in Canada

Alberta averages two crude oil spills a day for decades and all the AER can do is “urge” companies to improve detection of pipeline leaks?

Pipeline spills are not the exception in Alberta, they are an oily reality, Since 2006, province’s pipelines have spilled the equivalent of almost 28 million litres of oil

A History of Oil Spills on Long-Distance Pipelines in Canada by Sean Kheraj, Dec 2, 2019, The Canadian Historical Review, University of Toronto Press

Sean kheraj is an associate professor of Canadian and environmental history at York University. Learn more about his research at seankheraj.com

Leaks and spills have been endemic on long-distance oil pipelines in Canada since the mid-twentieth century. Evidence from the National Energy Board (neb) pipeline incident reports reveal a track record of thousands of spills totalling millions of litres of oil across the country. What causes onshore oil spills? Why do they occur? Where have they occurred? What have been the environmental consequences of these incidents? This article explores the history of onshore oil spills on federally regulated long-distance pipelines since the mid-twentieth century. It argues that oil pipeline spills are an endemic characteristic of complex enviro-technical systems built primarily for economic efficiency rather than environmental protection.Based on the analysis of incident reports submitted to the neb, the article finds that, while frequent, onshore oil spills in Canada have been variable in scale and have had a wide range of potential adverse environmental effects, depending on location, product type, and volume. The causes of such spills have also been variable, conforming to no obvious pattern over time. Instead, oil pipeline spills have occurred most often in an unpredictable fashion, posing great challenges for policy development. These spills have also represented a proportionally small fraction of the total oil delivered on Canada’s long-distance pipelines, but, in absolute terms, this has meant the uncontrolled release of many millions of litres of oil into the environment.

A few of the excellent visuals: 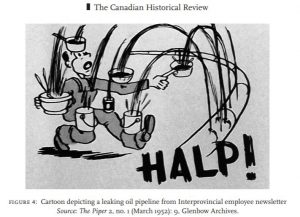 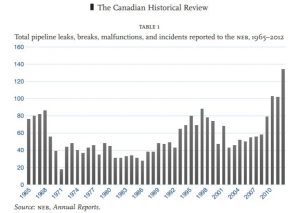 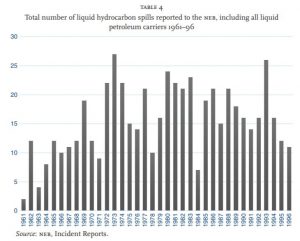 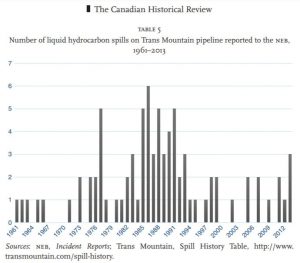 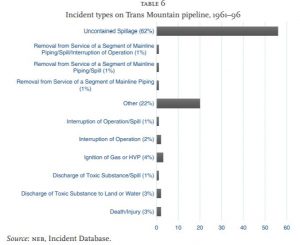 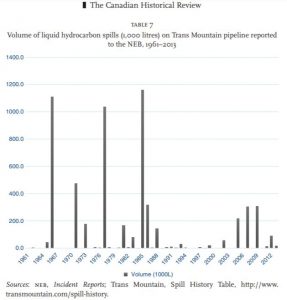 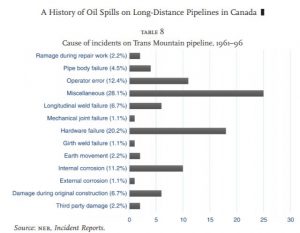 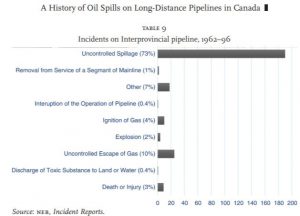 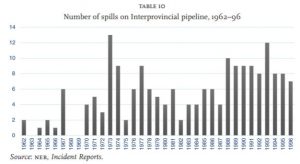 No Duty of Care, Charter violating, Legally immune (even for acts in bad faith & gross negligence) AER fails again! Yet another crude oil pipeline spill into an Alberta waterway

Valero Energy Inc. fined $500,000 for spilling 200,000 litres heavy fuel oil into stream that flows into Saint-Lawrence River, and failing to comply with order to clean it up. Where’s the fine to Encana for illegally frac’ing and contaminating a community’s drinking water supply?

Authority Bias Protecting Big Oil & Gas? CN Rail fined $2.5 million for spilling 90 litres diesel into North Saskatchewan River; Will Husky be charged & fined for spilling 225,000 litres bitumen into it? Encana not charged, fined nothing for intentionally injecting 18 Million litres frac fluid and more of other fluids into a community’s drinking water aquifers while continuing to refuse to disclose the toxic chemicals in the mix

Authorities still don’t know what caused Husky’s spill into N Saskatchewan River, or, don’t they want to let the harmed families and communities, and public know? Did Husky intentionally delay responding to the leak knowing the bitumen would sink, Intentionally delay to make nature carry the pollution burden?

Oil on and in the water: Husky’s toxic bitumen and chemical additive spill into drinking water of tens of thousands of Saskatchewan residents has many wondering if a similar disaster could strike Alberta. Why? It already has, repeatedly, with impacted Albertans living with and drinking the contaminated water

Only in Canada! Wanna bet Husky gets fined nothing for contaminating North Saskatchewan River, drinking water of 70,000 Canadians, and misrepresenting its toxic bitumen & diluent spill?

Water undrinkable in parts of North Saskatchewan River after bitumen, diluent spill, samples reveal. Husky off the hook? Saskatchewan government “unlikely” to clean all of the spill. Have the chemicals Husky spilled with the bitumen been disclosed yet? Are samplers testing for them and are they sampling the river bottom?

Husky kills summer fun and is already prepping to evade clean-up of toxic bitumen and chemical spill in N. Saskatchewan River: “Nature’s gonna fix it so we don’t have to.” Is that a certified oil spill response?

Husky’s bitumen & chemical spill contaminating drinking water for 70,000 people (so far) in Saskatchewan. “Other than sharing ways to hide, alter, or destroy evidence to protect the guilty, how would the NEB help?”

How are you enjoying life without water so far? Welcome to Ernst’s world, ten years in. Husky’s toxic bitumen-chemical spill traveled 500 km (so far) in North Saskatchewan River contaminating drinking water supply to many, four communities declare state of emergency.

Plains Midstream charged for largest Alberta oil spill in decades, Fines could be as high as $1.5M if found guilty

Is This Really What an Oil Spill Clean Up Looks Like?

Give us facts on Alberta oil spill, locals demand

Alberta couple devastated by oil spill on their property

Cleanup of latest Alberta oil spill could take all summer

‘My place is destroyed’: Albertan in wake of Red Deer River oil spill