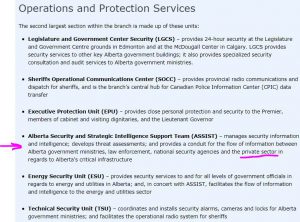 2007: Alberta Energy Regulator (EUB) illegally spied, then lied: “When allegations first surfaced that the EUB had hired private investigators to spy on the public, Mr. Stelmach backed the regulator’s assertions that the charges were false.”

2007: Landowners intend to bring legal action against the EUB for spying on them and intruding on solicitor client privilege

2007: Private Investigator posing as landowner was the worst, Spying on citizens casts a smothering pall of bias on any AEUB decision

2007; Spying by AEUB to be investigated

2007; EUB coverup shocking, Prove to be inept at spying and lying

EUB (Energy Utilities Board) was ERCB (Energy Resources Conservation Board). After the spying scandal and EUB was caught lying and breaking the law, Alberta govt switched EUB back to ERCB. After Ernst’s lawsuit went public, govt turned it into AER (Alberta Energy Regulator).

2007: If the EUB is truly repentant about its cloak-and-dagger spying efforts and really wants to regain the trust of Albertans, this focus on a single development project is a pretty weak effort

2008: Encana workers give press the finger

2009: The Intimidation of Ernst: Members of Harper Government’s Anti-terrorist Squad Intimidate and Harass Ernst after her Legal Papers were Served on Encana, the EUB (now AER) and Alberta Environment 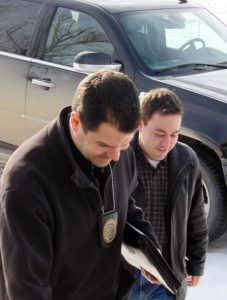 Dennis Defranceschi on the left, arrives with his anti-terrorist partner, warrantless at Ernst’s home. Did they and or ASSIST break into Ernst’s home a few years later? 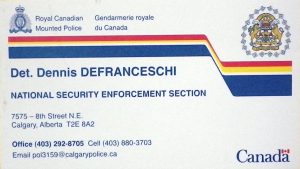 2012: Spying activities on Anti-Fracking Groups in Poland Impede Open Debate about the Risks of Shale Gas

2013: Hey CSIS, farmers are not terrorists, Anti-fracking activists have been labelled a security threat

2013: We’re Being Watched, How corporations and law enforcement are spying on environmentalists

2014: Complaint filed over alleged illegal searches of private information on Northern Gateway pipeline opponents by RCMP, CSIS and handing the information over to oil companies and Canada’s national energy regulator ]