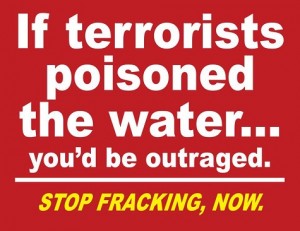 US EPA Takes Frac Deregulation to the Extreme: California and EPA Poised to Increase Oil and Gas Waste Injection into Protected Aquifers, Even as Need for Safe Groundwater Grows

Will waste water kill fracing? EPA bans disposal of frac waste at public treatment plants. Injecting it causes seismicity, recycling it is costly, using it to irrigate and landspraying it contaminates food, dumping it into waterways kills fish, pits filled with it leak, breathing it in aerosols corrodes lungs. What will companies do with it?

California now says 2,500 wells dumping frac waste into protected aquifers, up from 532 in February. Regulators order oil drillers including Chevron Corp. and Linn Energy LLC to halt operations at 12 injection wells (two were issued cease and desist orders) because they may taint groundwater suitable for drinking and irrigation

The injection wells have to be stopped, because the toxic, waste water will poison the drinking water for millions, which is worse than a weapon of mass destruction, and will destroy the agriculture of California. 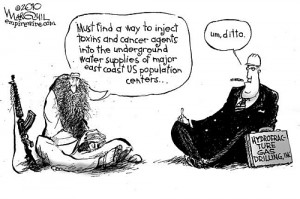 The division said it would continue to allow more than 1,600 other wells to continue injections into federally protected aquifers because it believes they stand a chance of being exempted from the Safe Drinking Water Act protections.

Yet the Western States Petroleum Association (WSPA), a regional oil and gas lobbying group, is still suing the agency to prevent any wells from closing.

In 2015, DOGGR, which oversees more than 50,000 wells in the state, promised to halt 475 injection wells in the state by Feb. 15, 2017, and impose minimum fines of $20,000 a day for every well continuing to operate in a protected aquifer. But on January 17, the division told the EPA that it would delay enforcing the law indefinitely, claiming it underestimated the time it would take to review the applications filed by oil companies for exemptions to regulation.

According to Patrick Sullivan, deputy communications director with the environmental nonprofit Center for Biological Diversity, DOGGR erred in three ways.

“DOGGR never should have permitted these wells in the first place,” Sullivan told DeSmog. “But after it was discovered that wastewater injection was polluting these aquifers, it set an incredibly lax deadline for closing down the wells. Then, it couldn’t even meet its own lax deadline.”

Sullivan added that DOGGR’s reasoning for not shutting down the vast majority of polluting wells is “appalling.”

“Essentially our state officials have decided not to follow the law because they believe it eventually won’t apply to these water supplies. That’s like driving a car as fast as you want because you think the speed limit will be changed.”

Now, WSPA has reversed its position. In January it filed a lawsuit, along with the Independent Oil Producers Agency and the California Independent Petroleum Association, to halt the shutdown of wastewater injections into all 45 aquifers targeted by DOGGR. The trade groups are asking that all wells remain open while the EPA reviews the applications for exemptions and that its members not be penalized the minimum daily fine of $20,000, per the state agency’s original mandate.

“WSPA believes DOGGR and other involved agencies should complete the aquifer exemption review process for all pending 42 applications, and that injection operations should cease only if an application is disapproved,” Reheis-Boyd wrote. “The EPA has now approved exemptions for three aquifers, and we anticipate additional approvals will be forthcoming.” [Just a few more all expense trips to Palm Springs, some padding cash for retirement, a nice chubby Board appointment somewhere …. ]

Hollin Kretzmann, an attorney with the Center for Biological Diversity, told DeSmog that it’s ironic that WSPA is complaining about DOGGR’s deadlines when DOGGR itself isn’t meeting its deadlines.

“There’s four million dollars a day that the state is not collecting while DOGGR drags its feet,” Kretzmann told DeSmog. “Meanwhile all of those wells are continuing to pollute California’s protected aquifers indefinitely.”

Kretzmann believes part of the motivation for WSPA and other oil lobbying groups to file suit to prevent DOGGR from doing its job, even as DOGGR appears to be falling down on the job, comes down to Trump. “The industry feels emboldened by the new administration,” Kretzmann said.

Though DOGGR has been slow in reviewing the wells it had targeted as aquifer polluters back in 2015, it has been relatively quick, environmentalists say, in submitting applications to the EPA to exempt dozens of California aquifers from the federal Safe Drinking Water Act. Exemptions are for aquifers, rather than specific wells, and each exemption would allow many wells to operate in — and pollute  — the aquifer.

In justifying its efforts to grant exemptions, DOGGR claims that many aquifers are too salty or otherwise polluted to provide usable water. But the Center for Biological Diversity’s Sullivan says DOGGR has relied on data from oil companies themselves to back that claim. That’s a problem because it doesn’t account for the advancing use of technology to treat brackish groundwater in California’s Central Valley.

“Many of these aquifers have water that’s many times less salty than seawater at a time when desalinization is increasingly important in California,” Sullivan told DeSmog.

“[DOGGR’s] mission is to help the oil companies and they haven’t invested nearly enough in oversight,” Rebecci said. “It’s truly the case of the fox guarding the henhouse.”

Other critics say the problem with DOGGR goes higher, up to Governor Jerry Brown, who oversees the division. In 2011 Brown fired Derek Chernow, the head of the Department of Conservation, along with Chernow’s deputy, Elena Miller, for tightening regulations on oil companies.

“Governor Brown set the tone for DOGGR when he fired Chernow and Miller for trying to fix problems,” Sullivan said. “By doing this he told the state regulators that if they do their jobs in addressing safety and the environment that they can be fired.”

Brown’s detractors say that despite California’s reputation as a green leader, WSPA and other oil and gas interests exert tremendous and growing influence over him and the state’s regulatory agencies. An American Lung Association study showed California oil and gas interests, the state’s largest lobbying body by far, spent more than $36 million in the 2015-16 legislative session, up from $34 million the previous year.

The report, titled How Green is Brown, claims that the Public Utilities Commission has approved “unnecessary” new fossil-fuel power plants (a claim backed up by a recent Los Angeles Times investigation) and that drilling and fracking have increased under Brown.

How Brown and state regulators will respond to the fossil fuel lobby’s pressures surrounding protected aquifers remains to be seen.