Notes by Marc Durand, D. Eng. in applied geology about the shale gas moratorium bill tabled in Quebec Legislature on May 15 2013 Translated by Amie du Richelieu, May 21, 2013 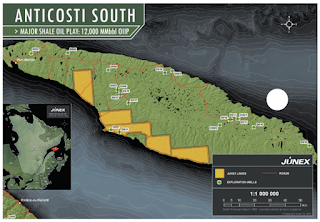 1- Fracking for shale oil is ten times less effective than for shale gas: only 1 to 3% (is extracted). In the case for gas, it’s 20%, which is still very little and is also a source of problems. We shall fracture all the volume of shale in Anticosti to get out only 2% of the oil. The rest will become a nuisance of slow leaking for an indefinite time in the future. This, the government has not taken the time to take it into consideration.

2- In rock (shale) like there is in Anticosti, hydrocarbons are finely disseminated in the whole of the rock. It is oil AND gas closely combined*. Impossible to extract only the oil; in fact, the gas will come out in great quantity through all the wells. In Anticosti, there is no, and there will not be any possibility to transport and even less get the gas to market. The only way out possible is to burn it by flaring like it is done in Dakota because of lack of pipelines that are too dear to build compared to the market value of gas. There is probably as much gas in the Macasty than in all of the Utica. [Emphasis added]