Potentially explosive methane gas leaking from energy wells may travel extensively through groundwater and pose a safety risk, according to a new study. It will also escape into the atmosphere as a powerful greenhouse gas.

Potentially explosive methane gas leaking from energy wells may travel extensively through groundwater and pose a safety risk, according to a new study by University of Guelph researchers.

Researchers at the U of G-based G360 Institute for Groundwater Research found the gas is highly mobile in groundwater, travelling far beyond the shale wells where it is drilled and changing the water chemistry. It will also escape into the atmosphere as a powerful greenhouse gas.

The findings were published recently in the journal Nature Geoscience.

Besides posing an explosion risk and degrading groundwater quality, methane can contribute to climate change when released to the atmosphere, said G360 director and principal investigator Beth Parker.

The researchers injected methane over 72 days into a shallow sand aquifer and monitored it for more than eight months at Canadian Forces Base Borden in Ontario. They found the gas travelled through the ground, was sometimes released into the atmosphere and dissolved extensively into the groundwater, where it changed water chemistry.

“If this water is extracted, say, by a farmer, the dissolved gas can be released and form an explosion risk or change the taste of the water,” Parker said.

“Depending on conditions of groundwater and aquifer minerals, microbes can ‘eat’ the methane and generate undesirable by-products such as hydrogen sulphide, and induce the release of trace metals into the water.”

The study found only small changes in water quality, said lead author Aaron Cahill, a former U of G post-doctoral researcher. He said the study covered only a short time period and used only small amounts of methane.

“For larger leaks over longer times and greater areas, these findings would indicate that the groundwater would become unusable,” he said.

Leaky wells could pose a significant danger to the environment in a number of ways, said Cahill, who is now at the University of British Columbia.

“Methane is 30 times more potent than carbon dioxide at trapping heat when in the atmosphere, so we need to consider both the air and the groundwater when monitoring for leaks. The impact to groundwater is likely to be long-term and persist long after a methane leak is fixed,” he said.

Energy wells run deep underground through many layers of rock and sediment, he said.

“When energy wells are constructed, the cement used might not seal fully, or will initially seal but as it matures little cracks can form, allowing gas to escape. While drilling is better than ever before, leaky wells are still common and represent a large liability for the oil and gas industry,” Cherry said.

Monitoring of groundwater for methane leaks is rarely done. That needs to change, he said.

“The industry needs a level playing field where the rules and reasonable expectations are clear. The gas will spread up and out in groundwater, so it is the responsibility of government to set science-based groundwater monitoring standards for all companies to meet.” [Emphasis added]

Abstract
Abstract• References• Author information• Supplementary information
Expansion of shale gas extraction has fuelled global concern about the potential impact of fugitive methane on groundwater and climate. Although methane leakage from wells is well documented, the consequences on groundwater remain sparsely studied and are thought by some to be minor. Here we present the results of a 72-day methane gas injection experiment into a shallow, flat-lying sand aquifer. In our experiment, although a significant fraction of methane vented to the atmosphere, an equal portion remained in the groundwater. We find that methane migration in the aquifer was governed by subtle grain-scale bedding that impeded buoyant free-phase gas flow and led to episodic releases of free-phase gas. The result was lateral migration of gas beyond that expected by groundwater advection alone. Methane persisted in the groundwater zone despite active growth of methanotrophic bacteria, although much of the methane that vented into the vadose zone was oxidized. Our findings demonstrate that even small-volume releases of methane gas can cause extensive and persistent free phase and solute plumes emanating from leaks that are detectable only by contaminant hydrogeology monitoring at high resolution. 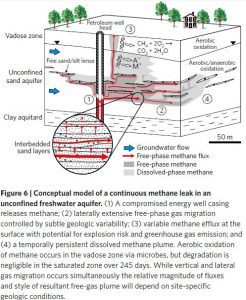 2015 07 14: What Does the Anti-fracking Movement Mean for Canada? “Movement?” When children die from E. coli tainted water and their parents warn others, is that a movement? 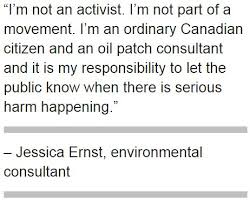 2013 Presentation on industry’s leaking methane migration problems in Alberta by Theresa Watson, who was appointed to the ERCB (now AER) Board, from 2009 to June 2013

Below is the last slide in Ms. Watson’s presentation!

Header of now removed www.gwynmorgan.ca website (Gwyn Morgan’s lawyers threatened to sue the blogger if the image was not removed, and demanded that the domain name be sold to Mr. Morgan).

2013 06: Ernst shares with the public, her gas migration brief summarizing industry and regulator research showing many cases of fracking contaminating drinking water – in some cases blowing homes and water wells up and killing innocent citizens. 2007 Even the EUB, later became ERCB, now AER, admits methane leakage is a problem (while lying to the public and impacted families, communities, and saying it’s nothing but nature raising hell. Slide above from 2007 EUB presentation on problem gas migration in Alberta.

2006 Alberta Views Cover article: “Encana admits it fractured into an aquifer at 05-14-27-22-W4M, west of Rosebud, but says water wasn’t contaminated.” (Would Encana admit it contaminated an entire community’s drinking water supply after intentionally frac’ing it?)

2006: Monday Magazine, Victoria BC, interviews Encana’s VP Gerard Protti (in 2013, the Alberta govenment appointed him to Chair the corrupt and Charter violating AER)

2006 Photo of Ernst’s explosive water by Will Andrushack is published in National Geographic in 2011. 2006: Ernst’s water after Encana illegaly fractured the aquifers that supply her well and community with drinking water.

The next day, clearly professional methane venting does not diminish the risk.

Bruce Jack below, the day of the explosion. He and two industry gas-in-water testers were seriously injured and hospitalized after Jack’s methane and ethane contaminated water exploded on testing day. 1996 Part 2: Migration of Methane into Groundwater from Leaking Production Wells near Lloydminster

1995 Part 1: Migration of Methane into Groundwater