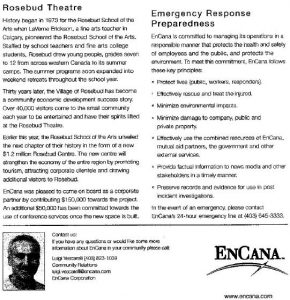 With natural resources making up a fifth of Canada’s GDP and providing almost 1.8 million jobs, gas production strongly impacts Canadians, Albertans and professors at the University of Alberta.

Assistant professor of Earth and Atmospheric Sciences Daniel Alessi has received $2 million in funding from the government of Canada and Encana to closely study the effects of hydraulic fracturing, or fracking, on water.

This funding adds to $3 million Alessi received as Encana Chair in Water Resources at the U of A for project work.

… This new funding will cover the hiring of up to 25 graduate and post-graduate students and the maintenance costs of the lab’s state-of-the-art equipment for studying water produced from fracking, Alessi said. [Or is it how Encana controls the thoughts and voices of Alberta youth?]

The three researchers are figuring out why some samples are more toxic than others, Alessi said.

“We’ve characterized these fluids better than anyone in the world at this point.” he said. “One thing that we’re doing that nobody else is doing very much of is linking specific chemical phenomena in the fluids, to measure toxicity of these fluids onto aquatic organisms.”

“It’s easy for people to jet up here to the oil sands and criticize Albertans for extracting that resource,” he said. “But then the question is, ‘What is your carbon footprint and what are you actually doing?’ Are you really willing to live a life style that is petroleum-free, for example and do you know the implications of that?’”

Alessi thinks fracking will be used in the future and that his research will lower water use, increase recycling and mitigate the toxicity of water used in the process. [Has Alessi integrity and ethics?  Will he disclose all the chemicals Encana is injecting and in flowback?  Has Encana disclosed to Alessi all the chemicals the company is injecting or is Alessi guessing?]

As a scientist, Alessi views his role in the debate as providing accurate information without personal opinion. [!! He just gave his personal opinion, a few paragraphs ago: “Alessi believes the answer lies somewhere in the middle.”] He has spent years working on this issue and thinking about it carefully and not reactively, he said. [What would Alessi’s opinion be if he and his loved ones lived a decade without safe water for bathing, ingesting or even toilet flushing and lived for years in explosive risk because of Encana’s, Alberta Environment’s and AER’s fraud, corruption, gross negligence, acts in bad faith, bullying, lies, covering-up Encana’s law violations? ] Without the new funding from the government of Canada and Encana his team would not be able to study the flowback and its implications as closely, he said.

“Even as an undergraduate you have some years to think about a few problems very carefully and it’s a wonderful thing to be able to try and understand the nuances,” he said. [Or brainwash students into believing it’s perfectly fine for multinationals to break the law and frac drinking water aquifers and contaminate them and buy the company’s way out of accountability by bribing professors and students?]

Fracking wasn’t always Alessi’s focus — as an undergraduate student in 1997, Alessi studied geology at the University of Wisconsin and went on to pursue environmental geochemistry for his MA and PhD. When Alessi met with Encana, he learned fracking was a project he was qualified to pursue at the U of A.

Why provide a bribe the day after peer-reviewed data is published proving that Encana frac’d and contaminated drinking water aquifers in Pavillion Wyoming, that no Canadian mainstream media, including the Edmonton Journal, reported on?

Why now, is Encana buying researchers, promising to make frac fluids clean, green and safe, or safer, when Encana promised to do that in 2005, but didn’t, and again, in 2013, but didn’t, etc etc etc?

Why is Encana violating the Alberta Rules of Court and refusing to comply with Chief Justice Wittmann’s Court Order to provide all relevant documents, including all chemicals injected into the aquifer that supplies Ernst’s water well, to Ernst by December 19, 2014?

Researchers at the University of Alberta are looking at ways to make hydraulic fracking more environmentally friendly and cost-efficient when it comes to water usage.

The five-year study, which has received $2 million from industry and a national research council, will examine the potential impacts of fracking fluid when it spills on the ground or flows back to the surface from a hydraulic fracturing well. Scientists also want to uncover new methods for reusing and treating that flowback and produced water.

“Essentially, the water chemistry changes as a function of time as it comes out of the well and it also changes depending on where you’re fracturing in the formation,” said Daniel Alessi, an assistant professor in the U of A’s earth and atmospheric sciences department. He is working with aquatic toxicology expert Greg Goss and analytical organic chemistry researcher Jonathan Martin.

“We want to build up a database where the companies can look at this and say, ‘OK, if I’m at this point in my well, I can expect this type of water, for example, and therefore use this treatment process for this fraction of the water.’

“If we can increase recycling by 10 per cent [have companies been lying then, when publicly boasting (and lying), claiming 100% recycling?], that’s a lot of money we’re talking about in terms of cost-savings for the company … and by increasing recycling, we’re directly mitigating water being taken out of surface water bodies.” …

“Some of that water, anywhere from a few per cent to most of it, will come back out of the well and the problem is that it’s gone from fresh water that had some chemicals put into it to water mixed with whatever is in the formation itself.”

In Alberta’s Duvernay oil and gas field, fluid flows back with much more salt content than the water pumped in, Alessi said.

Researchers also want to find out if the chemicals pumped into wells with the fresh water undergo reactions and transform below the surface. “One of the things we want to study is if that something different is a chemical of concern that might have gone from something benign to something of potentially environmental concern.”

Best practices found through the study will be shared through scientific publications and public forums.

The study received nearly $1 million from the Natural Sciences and Engineering Research Council of Canada [Why are taxpayers paying for industry’s water pollution propaganda?]. Energy company Encana provided more than $1 million. Alessi said the research will be published in peer-reviewed journals and there are no external pressures on his research. [If he has to publicly state that, the pressures to publish industry’s bidding must be high]

Unrelated research announced this week from the University of Calgary suggested fracking, not the disposal of wastewater by injecting it back underground, was behind earthquakes caused by humans in Alberta and British Columbia. [Why not report on the damning new news (instead of years old frac’ing causes quakes news) regarding data and evidence published yesterday proving Encana frac’d and contaminated aquifers at Pavillion, Wyoming? Emphasis added]

2016 03 30: Why did no Canadian media or blogs, other than The Tyee, report on Digiulio & Jackson’s damning new study confirming Encana frac’d & contaminated drinking water aquifers at Pavillion, Wyoming?

2014: Pavillion citizens with contaminated groundwater file state records request for draft investigation reports, object that Encana can review them and make comments, but harmed citizens and the public can’t

2014: Wyoming Draft Report funded by Encana, says Encana not to blame, suggests nature and water well owners are; frac chemicals not disclosed by Encana to the state – What kind of a review is that?

The government claimed the report was an independent review that proved there was no merit in the Ernst case.

Klippenstein argued that such a filing of evidence was inappropriate at this time.

Hi Alec, some more comments on the Ernst report, that for some reason I failed to include below:

Pg 19 – not sure Wikipedia is a valid reference source, though I’ve been out of the academic scene for awhile.

Pg 6 … needs to be corrected

Please leave the Kenny well out for now, as you’ll address it in other reports. Perhaps send me an updated draft before WE finalize.

Pg 8, 2nd para – a study of the potential for methane migration … is currently under investigation by AENV. WE plan to mention this study when WE roll out the complaint review findings, so perhaps WE should leave it out of this report.

Also I attach a comment by Leslie Miller, which you may want to consider incorporating.

Hi Alec, just a couple of more comments on the Ernst report, please make the changes …

Also, I like how you phrase things at the end of page 31 about propane/butane (last sentence) and wonder if you can use this wording in the Ernst report as well if it’s not too late.

Some of the cleaned water will be used for [oil]field operations….

Mr. Richard Dunn (Vice-President, Canadian Division, Regulatory and Government Relations, Encana Corporation): In addition to our own internal focus on innovation, we support external R and D efforts through third-party partnerships with academia. Recently, for example, Encana made a five-year pledge of $1 million to support research activity at the University of Calgary’s Institute for Sustainable Energy, partnering with Alberta Innovates—Technology Futures, which is a Government of Alberta-sponsored organization dedicated to helping industries find solutions and move technologies to market. A portion of this investment was directed toward an endowed chair dedicated toward research in unconventional natural gas. …

At Encana we’re proud—having implemented this practice—of taking the step to eliminate the use of diesel, benzene, and heavy metals, such as cadmium, arsenic, chromium, lead, and mercury in our hydraulic fracturing fluids. [Emphasis added]

2008: EnCana donates $7.5 Million to the University of Alberta on the same morning as 8 Alberta Landowners Reject Closure of Groundwater Cases: Demand Proper Study of Industrial Contamination 2005: EnCana’s ‘field of dreams’ has Colorado locals crying the blues

2004: EnCana racks up the fines in Garfield County, Colorado

David Willis took you to [Garfield County] West Colorado where small towns there are experiencing a natural gas boom. During filming, a group of local residence played a bluegrass song that Encana took them to court to stop singing and it was thrown out of court.