Alberta Provincial Court Chief Judge Terrence Matchett: “Justice delayed truly is justice denied.” Wait time for civil cases reaching trial in Alberta can take 2.7 years. Ernst case is in its 9th year with Ernst still waiting to find out if she can start her lawsuit against AER for violating her Charter rights

Members of a Senate committee convening in Calgary were told some cases were now delayed for trial until 2018, and Alberta Chief Justice Neil Wittmann blamed what he called Ottawa’s unfathomable failure to fill vacancies.

“There is an alarming increase in lead times in our court . . . we have sent home eight because we didn’t have a judge to hear them,” he told the Senate legal and constitutional affairs committee.

“There are plenty of candidates in the pool in Alberta . . . why it can’t be filled concurrently with the happening of a vacancy has never been explained to me.”

A wait time for criminal cases reaching trial is now typically between 62 and 63 weeks, while civil matters can take 138 weeks [2.7 years], said Wittman, a state of affairs he called “unacceptable.”

He said there are nine Court of Queen’s Bench justice vacancies to be filled in Alberta, though Ottawa has insisted there are fewer than that.

Filling six of those spots is urgent, he said.

A few decades ago, it wasn’t unusual for provincial court cases to be tried in two to three weeks after a first court appearance.

Now, the norm is five to 10 months, said Matchett.

“The No. 1 priority of our court according to judges is reducing wait times,” he said.

Alberta has the lowest judge per capita ratio in Canada, the committee also heard. [Intentional political design to better serve big oil via the tremendously long delays scaring harmed Albertans out of the legal system or quickly settling and gagging, keeping industry’s toxic pollution locked up in secret files, even for drinking water contamination cases that affect the public interest?]

After 20 hearings on the issue, it’s clear the spectre of massive numbers of [criminal] cases being turfed nationwide is growing, said Senator George Baker.

“If we don’t get ahead of this, there’s a possibility of thousands of cases being thrown out because of court delays,” said Baker. [There are time limits for criminal cases to be tried, but not for civil cases]

Diverting more cases from the criminal justice system by means of specialized courts and restorative justice could reduce waits, costs and recidivism, the judges said.

And eliminating preliminary hearings in child sex-assault cases would streamline the system and spare children from the trauma of testifying, said victims’ advocate Sheldon Kennedy.

“The imbalance of power is real,” Kennedy said of children facing their accusers in court.

But he cautioned against cutting too many corners to reduce trial lead-up times.

“Don’t spin people through the system as fast as we can — we need quality,” said Kennedy.

The growing complexities of criminal law and the length of time it takes to process DNA evidence are feeding those delays, city police Chief Roger Chaffin told the committee.

When [criminal] cases are thrown out due to delay, it’s a major setback for both police and victims, he added.

“That simple delay in court means all that work is destroyed and they have to start over again,” said Chaffin. “Every delay puts peoples’ lives at risk.”

The committee’s recommendations are to go to Parliament next spring. [Emphasis added]

December 3, 2007: Ernst filed her lawsuit in Drumheller Court against the AER (then ERCB; was the EUB when the regulator violated Ernst’s Charter rights), Alberta government and Encana.

April 2012: Ernst’s first court hearing in Drumheller where Justice Barbara Veldhuis requested a shortened Statement of Claim, complaining too much information was in it. Ernst agreed. Ernst’s lawyers stated in court that invariably at a later date, Ernst would be chastised for not having enough information in her shortened claim (which indeed happened, two years later, at Alberta Court of Appeal).

October 2012: In a Case Management phone call, AER’s Glenn Solomon and the other defendants’ lawyers demanded that Ernst’s case be moved to Calgary (Encana’s lawyers didn’t want to drive that far). A few days later, the court moved Ernst’s case to Calgary. The Rules of Court require Ernst’s case to be heard in Drumheller, the jurisdiction where the harms took place.

January 18, 2013: Ernst’s second court hearing in Calgary heard by Justice Barbara Veldhuis. Ernst attended her hearing with a witness in the waiting room of the Drumheller Court house where her case belonged: February 8, 2013: Harper government suddenly promotes Justice Barbara Veldhuis. Completing her ruling on the Ernst hearing as normally would occur was “not an option.” Justice Neil C. Wittmann volunteered to take over. Eight months after the hearing, Justice Wittmann rules on arguments he did not hear: February 18, 2014: Alberta Environment copies how Justice Wittmann let the AER out of the Ernst lawsuit, and Justice Wittmann grants them a third preliminary court hearing to try to strike out her case. 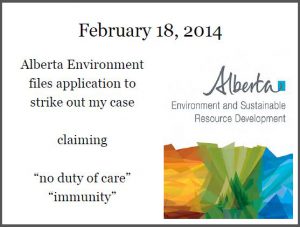 May 2014: Ernst vs AER appeal is heard at Court of Appeal of Alberta, where the justices complained there was not enough information in Ernst’s shortened Statement of Claim. They also wanted to hold a trial then and there, but were not able to because the AER had not yet filed a Statement of Defence. Seven months later, the court denied Ernst’s appeal, claiming the AER had legal immunity, even for Charter violations.

November 2014: Ernst files Leave to Appeal to the Supreme Court of Canada for her valid Charter claim against the AER.

December 19, 2014 Deadline Ordered by Chief Justice Neil C. Wittmann: Encana did not meet the deadline and continues to this day to refuse to file important and relevant records in document exchange with Ernst for her lawsuit. Vital records that Ernst remains waiting for include the “public” water testing records collected by Encana and all chemicals the company intentionally injected into Rosebud’s drinking water aquifers.

May 2015: After the NDP won the provincial election, Alberta Environment was found illegally destroying “344 boxes of executive records” including related to litigation. 8.5 months (37 weeks) have passed without a ruling yet from the Supreme Court of Canada.

Ernst’s lawsuit is in its ninth year and has cost her nearly $400,000.00; Ernst still doesn’t know if she can sue the AER for her valid Charter claim against the regulator.

Encana has not yet argued for Ernst’s case against the company to be struck. How many years of preliminaries and hundreds of thousands of dollars more will Ernst have to sacrifice before she can try to get a date set for trial? And then, how many years will she have to wait for a trial date?

2016 06 06: Federal Justice Donald Rennie: “Protection of the environment is, unequivocally, a legitimate use of the criminal law purpose.” Tarsands giant Syncrude loses court fight against rules

2016 05 30: Big Thinking Lectures at U of Calgary: Supreme Court of Canada Chief Justice Beverley McLachlin on rule of law principal that “no one, no matter how important or powerful they are, is above the law in a diverse society.”

2016 05 27: “Where does the buck stop?” AER to appeal ruling on oil, gas cleanup obligations. Chief Justice Wittmann found Alberta’s oil and gas licencing regime to be unconstitutional relating to money, but not in Ernst’s “valid” constitutional claim against AER relating to drinking water contamination by oil and gas

2016 05 18: “Corruption … At A Gallop.” Ex-Justice Minister Peter MacKay urges: “Respect the Rule of Law” while the RCMP, Encana, AER, Alberta and Harper governments busily break it?

2016 05 17: Stephen Harper intentionally denying Albertans justice? How long will his toxic disdain for the courts live on? “Harper government failed, over years, to live up to its constitutional obligations to fill vacancies on the bench, with perverse negligence for a party that claimed to be all about law and order.”

2015 10 10: Let’s Heave King Steve: “This law-and-order man routinely abuses the legal system, wasting more than $100 million a year in courts denying justice to the Aboriginal Peoples; keeping Omar Khadr tangled in specious cases despite losing at every turn, including thrice at the Supreme Court; not accepting three court rulings against his ban on the niqab; and fighting scores of Freedom of Information requests. When the judges don’t do his bidding, he insults them, including the chief justice of the Supreme Court.”

2014 05 05: Harper’s attempt to smear Chief Justice of Canada an affront to our constitutional system; Chief Justice Stands Her Ground

“The system fails to meet the public’s reasonable expectations of timeliness.” … Just as physicians guard their professional autonomy, so judges defend “judicial independence.” They don’t like outsiders prodding them or poking about in their affairs, let alone criticizing the slow administration of justice.

Ms. McLachlin said the issue is especially relevant to civil courts, where there are not enough judges, lawyers are expensive – “I am not criticizing that, but it’s a fact” – and there are delays. The issue, she noted, is under review by the Action Committee on Access to Justice in Civil and Family Matters, which includes the Canadian Bar Association, Justice Canada, and the Canadian Judicial Council.

“We have wonderful justice for corporations and for the wealthy. But the middle class and the poor may not be able to access our justice system.”

[Chief Justice Beverley McLachlin] says there are more and more people who are being hindered by barriers such as cost, delay and complex procedures.

“A court system where some ride to justice in a Ferrari while others don’t get out of the garage falls short of the ideal of justice for all,”