Port Alberni, BC: Andrew Nikiforuk on LNG & fracking and Kimberly Mildenstein on her family living abused by hydraulic fracturing in Alberta

The province of B.C. could do well to look at Alberta before leaping too far into liquefied natural gas, according to journalist and author of Slick Water: Fracking and One Insider’s Stand Against the World’s Most Powerful Industry, Andrew Nikiforuk.

“It’s a very volatile industry,” said Nikiforuk. He will be speaking on the issue of fracking this Thursday, Feb. 25, 7 p.m. at Echo Centre.

“We’ve had a global glut of LNG compounded by a significant drop in demand in Asian markets, particularly in japan, south Korea and China which means that the LNG markets are going to be pretty volatile for probably the next decade and to tie your fortunes to an industry like that is probably not a prident thing to do,” he said in a telephone interview.

“B.C. has not learned the lesson and it has repeated all the same mistakes,” he said.

Instead of caution, the province has rushed ahead with development.

The impacts of hydraulic fracturing, known as fracking, have already been felt in the province.

In December 2015, B.C. Oil and Gas Commission CEO Ken Paulson said that a 4.6-magnitude earthquake near Fort St. John in August was caused by fracking.

“This seismic event was caused by hydraulic fracturing,” Paulson told the CBC.

“This industry has changed the seismic patterns of northern British Columbia already and is responsible for some of the largest earthquakes ever caused by this technology.”

The earthquakes caused by fracking have serious safety and environmental consequences, he said.

“Scientists have very serious concerns about the impacts of fracking and cracking all of these rocks underground and what that eventually is going to mean to groundwater resources and gas migration because all earthquake activity loosens gases in the ground and sends them on weird migrations, mostly into the atmosphere or into water resources,” said Nikiforuk.

“As a result, where there is a lot of fracking you have elevated levels of methane, CO2 and radon in the atmosphere above the fields being fracked.”

According to Health Canada, inhaling radon can damage lung cells and increase incidences of lung cancer.

According to Nikiforuk, there are no upsides to the LNG industry—not even jobs.

“That’s the first fallacy. LNG is not a job making industry, it never has been, never will be. It’s a capital intensive industry.

The industry’s claims about job creation are overblown, he adds—and that includes the estimates that Steelhead LNG and the Huu-ay-aht First Nations, who are partnering on a proposed $30 billion LNG plant at Sarita Bay. Estimates given by former Huu-ay-aht executive director James Edwards included 3,000-4,000 construction phase jobs and 300-400 operating jobs.

“I would say that almost all those job figures are inflated and certainly for the amount of jobs that will be created during the construction phase. Industry always does this, they always come up with inflated figures and reality never matches the promises made by  industry. The oil and gas industry has a long historic record of promising the moon and delivering much less.”

Nikiforuk has harsh words for anyone thinking that LNG facilities don’t have a direct hand in causing the environmental issues outlined above.

“Those are immoral and criminal statements. It’s like saying that pipelines shouldn’t be concerned about the greenhouse gas emissions of the extraction of bitumen. That’s a kind of weird disassociation from reality. You can’t have LNG without fracking and you can’t have fracking without making earthquakes and contaminating groundwater and industrializing forests of northern B.C.”

While Steelhead LNG has been lauded for its consultative process with the Huu-ay-aht, Nikiforuk said that the industry has a much uglier face up north.

“The reason that LNG proponents come to first nations is because they think they can get a much better deal there than they can anywhere else and they want to take advantage of that,” he said, adding that the rights of Treaty 8 nations have not been respected.

But the long-term impacts of the LNG industry will be felt on Vancouver Island.

“People on the Island also need to start wondering, okay, so if three proposed terminals are actually built, what are they going to do when natural gas runs out in northern B.C.? Nikiforuk said.

“The Island actually has a lot of coal seams. The government has explored these coal seams, they know that they are methane rich. So in the future, when these LNG terminals in B.C. demand that the coal seams on the Island be fracked in order to keep their facilities full? Those are the kinds of long-term questions and analysis that just hasn’t taken place in the province.

Nikiforuk will be presenting “The Reality of LNG: Fracking, earthquakes and fractured economies” at Echo Centre on Thursday, Feb. 25 at 7 p.m. Admission is by a suggested donation of $10. [Emphasis added] Titled “The Reality of LNG: Fracking, Earthquakes and Fractured Economies,” Nikiforuk paints a grim picture of how the industry affects communities in its path.

And he blasts the “obscene cheerleading” by B.C. Premier Christy Clark for LNG development, including the proposed Huu-ay-aht/Steelhead LNG project in Nuu-chah-nulth territory, when the world market for liquefied natural gas has nearly collapsed.

“B.C. gas revenues have been declining steadily, year-by-year, for the past decade, as a result of low prices and reduced royalty rates. The government has now committed to an appallingly low tax rate,” Nikiforuk told Ha-Shilth-Sa. “The business model for this truly sucks, and the people of B.C. haven’t heard a lot about it.”

Disproportionately, it’s the First Nations communities, most notably the Treaty 8 Nations in Northwestern B.C., that will bear the brunt of the environmental impacts as the energy industry assaults the subsurface with hydraulic fracturing – fracking for short – to release natural gas trapped in rock formations deep underground.

Seismologists now say with certainty that fracking is causing earthquakes and contaminating the underground water supply in regions with drilling activity.

The industry term for fracking is “brute-force technology.” Nikiforuk said the tactics used to sell the development are equally brutal at fracturing communities.

“I think what you are seeing is big companies trying to entice First Nations into a game that is lose-lose for everybody,” he said.

In the Treaty 8 Nations, the companies typically attempt to buy support from those who are willing to be bought, and to shun the rest, said Nikiforuk.

“That’s how business is done in rural Canada,” he said. Watch for more of this divide-and-conquer activity as development activity heats up in new locations like Vancouver Island, he warned.

Nikiforuk has been speaking out across the province for the past two years, and the economic picture for LNG has only gotten worse. Demand for LNG is steadily evaporating in China, Japan and South Korea, while the output of fracked gas has skyrocketed, according to the industry’s own reports.

“The so-called Oil and Gas Commission is 100 per cent funded by the industry. So the question is, who is looking after the public interest,” Nikiforuk said. “There should have been some sober second thought on this in the province, but so far, there hasn’t been.”

According to Nikiforuk, the province is actually subsidizing gas exploration and development by providing tax breaks, subsidized geoscience services and free water.

It is “almost a Soviet approach” to the development of the LNG industry, he contends.

Alberni-Pacific Rim MLA Scott Fraser said while this province is fortunate to have large stores of natural gas, with the potential to generate great wealth, the role of government is “to balance that with the public interest, First Nations interests and the environment.”

Fraser said he has seen first-hand the environmental and social damage that has already been inflicted in Treaty 8 traditional territories, and that damage has been spreading west to the B.C. coast and beyond.

Fraser called the Liberal government promises of LNG wealth “absurd,” and cited a deliberate campaign to tar critics as “ragtag” and the “forces of no,” words referencing a First Nations group opposed to building a LNG terminal at Lelu Island.

“[Clark] is trying to vilify those who have legitimate concerns,” Fraser said.

The Nikiforuk event has been organized by Keith and Bernadette Wyton as a private initiative with no link to any organization.

Keith Wyton said he and Bernadette have communicated with Nikiforuk on a number of issues over the years, including the (unsuccessful) BC Hydro proposal in 2000 to build a gas-fired 250-megawatt generating plant at an industrial park near the old Alberni Mall.

“Then we attended a talk he gave in Squamish, a year ago last October. He was brought in by a local citizens’ group that are opposed to the Woodfibre LNG plant.”

Wyton said with the proposed Steelhead/Huu-ay-aht First Nation LNG project now proposed, it is time to “widen the discussion.”

“So far, all of the information that has been provided to this community has been by the proponents. We believe there is a need for more due diligence.”

Nikiforuk believes that greater awareness on the part of the public could help rein in the LNG juggernautbefore it causes irreparable damage to the B.C. economy. But that means overcoming the sheer volume of promotional material flowing from the province and from the industry.

“My job as a journalist is to bring these bits and pieces together so people can see the bigger picture,” he said.

Following Nikiforuk, there will be a short presentation by Kim Mildenstein, who moved her family from the oil patch in northern Alberta to Duncan, to escape the gas exploration industry.

Bernadette Wyton said her story illustrates the divide-and-conquer tactics used by the industry to fragment communities.

“She will give a window – a more personal story – on the industry.’”

Nikiforuk’s previous books include The Tar Sands: Dirty Oil and the Future of the Continent, which won the 2009 Rachel Carson Environment Book Award. That followed Saboteurs: Weibo Ludwig’s War Against Big Oil, which won the Governor-General’s Award for Non-fiction in 2002.

Echo Community Centre is located at 4255 Wallace Street. Admission to the event is by donation ($10 is suggested). [Emphasis added]

THE REALITY OF LNG: FRACKING, EARTHQUAKES, AND FRACTURED ECONOMIES

Suggested Donation: $10
Andrew has followed the oil and gas industry for over 20 years. His bio, below, demonstrates that he is uniquely qualified to contribute to our understanding of LNG and what it means for our region.

In BC, 70-90% of all oil and gas wells are fracked. Fracking and LNG stand poised to permanently change the face of Sarita Bay, Bamfield, Barkley Sound, Port Alberni, and Vancouver Island. We need to understand all the impacts of these projects in order to make informed decisions.

Please join us to listen to this renowned oil and gas expert.

2012: Bomb threat accused will be sentenced next month

2012: Woman charged with making threats against oilfield operator near Sundre 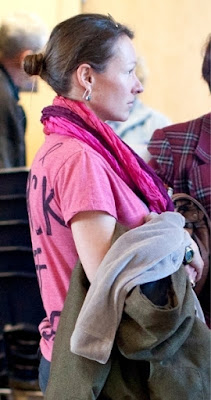 Fracking Canada: No Duty of Care ]